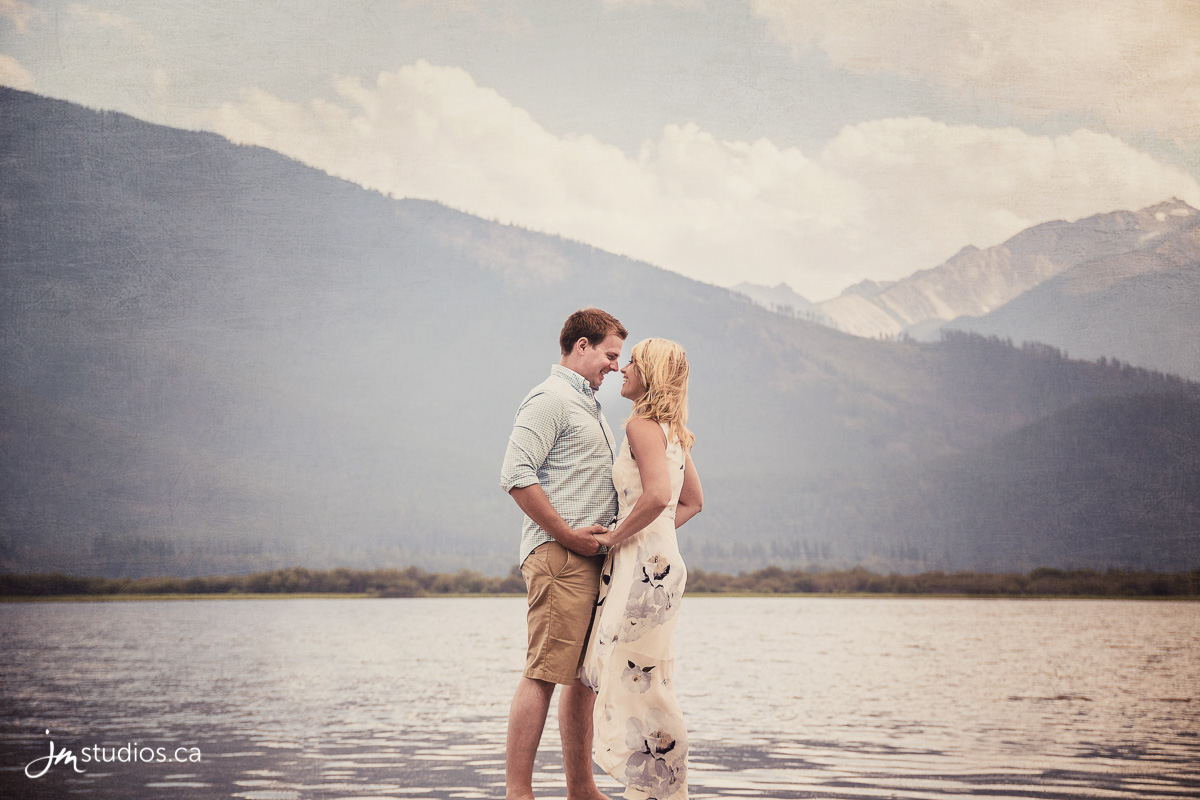 A Glowing Sky at Vermillion Lakes

Ever since Ken and Jennifer began dating, he seemed nonchalant about marriage. This humble attitude, however, was all a ploy to set up a proposal. She had pointed out a few rings to him, but she was sure that it would never happen because he seemed uninterested in the idea.

He decided to propose on a day already full of celebration. They received the keys to their new home, and he bought a nice bottle of champagne to celebrate. They entered the house, and he poured them each a glass of bubbly before dropping to one knee, ring in hand. She was caught off-guard and at once experienced a huge array of emotion. Not only were they celebrating their new home, but she was also suddenly being proposed to!

Right away she responded with a “Yes!”. The ring, she says, is even better than those she had recommended. He chose a unique and gorgeous setting, with a sapphire tucked beneath three square cut diamonds.

Their Engagement Session at Vermillion Lakes

For the session, we headed out to Vermillion Lakes inside of Banff National Park. The location is incredible, with the staggering Mount Rundle hovering in the background across the water. The lakes are close to the Banff town site, making them an ideal spot for exploring the Rockies.

Jennifer and Ken brought their dogs Luca and Fletcher along to the shoot, who proved to be a lot of fun throughout the day. We started out at the docks that overlook the open water and the mountains. Recently, there have been several forest fires raging across Alberta and BC, which left a of layer haze over the landscape of the Rockies. In the end, the smoke created a picturesque atmosphere that turned out to work nicely for photographs. It made for some red, moody lighting, as the sun reflected off the ash in the sky. It allowed us to play with light a little differently than normal, so we used it to our advantage.

Down at the docks, we moved into a small alcove, but the dogs immediately began to splash in the water, so we relocated to the forest. From the lakes, we walked down the path to a small wooden bridge spanning one of the creeks. The space was gorgeous, despite the multitude of mosquitos in the vicinity. Ken and Jennifer were so easygoing; the mosquitos didn’t bother them one bit.

The dogs splashed around in the creek before Jennifer and Ken wrangled them up to drape wooden signs around their necks. Luca and Fletcher posed patiently on the bridge before it was time to play again!

As the sun began to set, we took advantage of the warm orange glow in the forest. We used some anterior flash to highlight Jennifer and Ken and then shot a few close-ups with the red light of the sun behind them.

For the last set of shots, we headed down into the valley, just as the sun was getting ready to duck behind the mountains behind the Vermillion Lakes. The lighting again was incredible and cast a warm hue on the entire shoot. To finish up, we took several pictures of Jennifer’s beautiful ring against a natural wood backdrop.

We had a nice day with Ken, Jennifer, Luca, and Fletcher! It was a lot of fun having the dogs out, and they were an absolute pleasure to photograph.