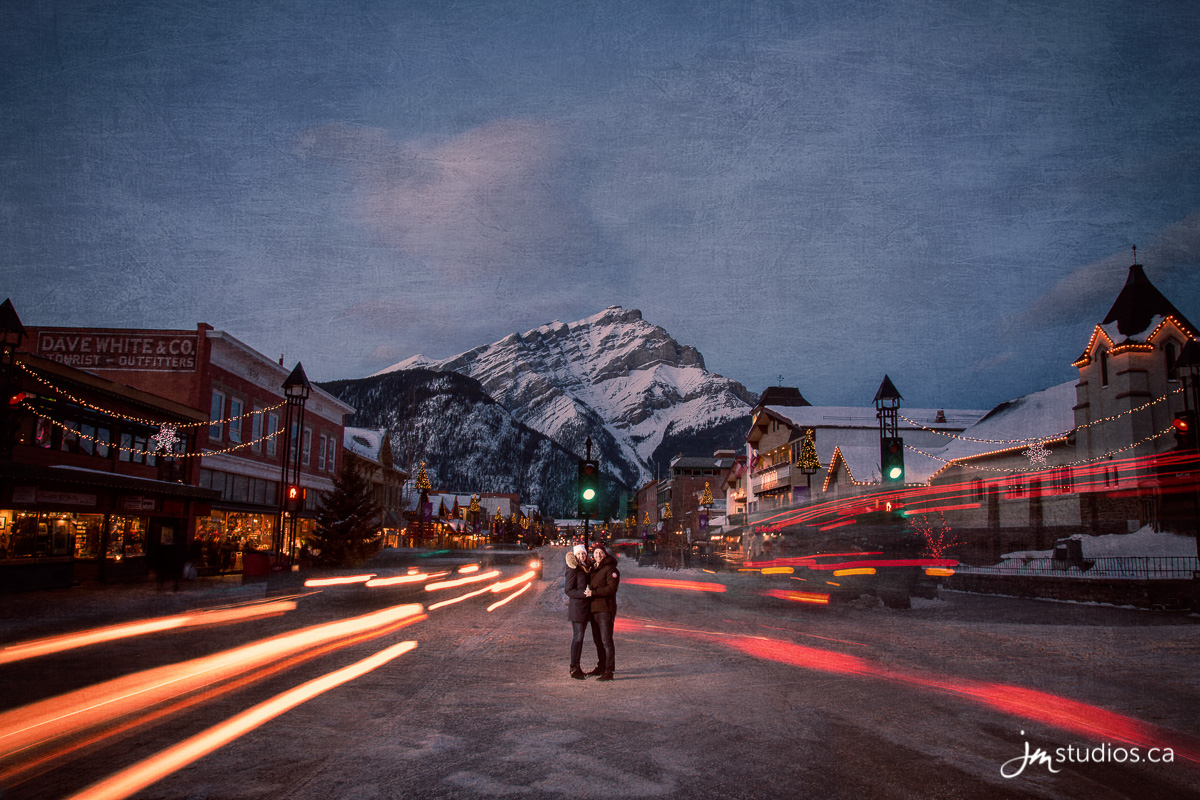 A Snowy Sunset in the Rockies

How Justin and Alina Met

Five years ago, out on the dance floor at the bar, Justin saw Alina dancing, walked up to her and gave her a little hip-check. They danced the night away, and before parting, he put his number in her phone as “Justin You’d-be-an-idiot-not-to-call-me.”

So, therefore, after laughing at his bravado, Alina made the call. They went for coffee at Second Cup, and have been together ever since!

A few years into their relationship, the first Tiffany opened in Edmonton, so they headed over to take a look at the rings. They found an endearing one, but one look at the price tag had Alina believing it was entirely out of their price range. However, Justin is a fan of the finer things in life, and he ended up going back and buying the ring. Before the purchase, he called his three-year-old cousin, and asked him the critical question… “Square or Circle?”

“Circle!” His cousin replied, and therefore Alina got a circle cut diamond.

A Proposal in the Big Apple

So, he had the ring. On the day of Alina’s graduation from pre-med, he snuck off to ask her parents for permission to marry her, to which they heartily agreed. Come June of 2016; he was ready to propose. Despite being together for nearly five years at the time, Alina wasn’t aware of any preparations to propose. She thought it MIGHT happen in 2016, but he threw her off the trail.

On a trip to New York, the couple went to visit the ONE Trade Centre in the city. It was a warm day, but Justin ran back up to the room to ‘grab his jacket.’ She was a little suspicious, but the proposal didn’t come. In truth, he had planned to propose and did in fact run up for the ring, but the Trade Centre was too busy for an intimate proposal. Alina was resigned that it wouldn’t be happening on the trip.

The next evening, before heading out to see The Book of Mormon on Broadway, the couple went for a nice dinner. After ordering their meals, Justin disappeared for nearly twenty minutes, much to the chagrin of his soon-to-be fiancée. She waited and grew impatient, especially after their food arrived, cooling with every minute he was gone.

Meanwhile, Justin was up to something. He was trying to get access to the roof. Somehow, despite an exclusive event taking place, he managed to convince security to let them up. When he returned to the table, he excitedly told her he’d found an incredible view, and needed to share it with her.
Once they had climbed to the rooftop, overlooking Manhattan, Justin dropped to one knee and made his proposal. She said yes, and said yes for nearly a solid hour after, because of the romance of the moment against the backdrop of the New York City skyline.

A few months ago we set up an engagement session with Justin and Alina, but the weather took a turn for the worse (and the highway to Edmonton was horrendous), so we ended up rescheduling. For the new session, they came up with the idea that we could meet up in Banff when they went to check out their upcoming wedding location. So, we took the opportunity and staged a photo shoot in the mountains.

We met them at the Moose Hotel in Banff (where they will be getting married this summer) and were joined by Christina Kemp with Modern Makeovers. Alina is a very natural person as far as hair and makeup go, and she was thrilled with Christina, who created a beautiful style that complemented Alina’s natural beauty.

While Alina was busy with Christina, we staged an offside photo shoot with Justin. He’s a big sports fan and can be found, on any given Sunday, watching football from morning to night. In the background of Alina’s hair and makeup shoot, Justin has the TV on, watching the game.

We also incorporated him into the shoot with Christina. Usually, to wrap up the hair and makeup portion of the day, we get a few shots of the final setting sprays being applied. Justin, who shaves his head, ended the session by having Christina give his head a polish!

We started out at Bow Falls because on a previous visit, Alina and Justin had left a lock on the fence. Our goal was to find and photograph it. At the base of the falls, we saw that much of the water was frozen over, so, in particular places, we could walk right out onto the river. As the sun disappeared, we captured some beautiful images. The mountains surrounding the area are incredibly tall, and because of this, they remained illuminated while the valley below became cloaked in shadow. There were so many fantastic vantage points that all we had to do was spin around for an entirely different backdrop.

While we were out, a proposal took place off in the background. They had a photographer in the distance to capture the moment, and everyone who witnessed the engagement stopped to applaud the happy couple. When we finished on the ice, we followed the falls up a staircase, but unfortunately couldn’t find the lock on the fence. While near the falls we used the treed pathway for its towering trunks and sat Justin and Alina in amongst the snow and bark.

Crossing the Frozen Bow River Along the Pathway

Back in the car, we drove into central Banff and made our way to the Southwest side of town, just before the bridge over the Bow River. There is a famous gazebo that serves as a ceremony site for many weddings, the surrounding green space, mountains, and river making it a beautiful location. When we arrived, we saw that the Bow was frozen from shore to shore, so we clambered across to the other side into an insulated wooded area. Behind the trees lies a snow-covered nettle field, so we headed in and photographed the Tiffany ring. Suddenly, a buck wandered into the clearing, and we all paused to watch him saunter through the field.

Back across the river, we set up for our final shot. Justin wanted a photo in the downtown core of Banff, so we used the multi-directional crosswalk and a delayed exposure to create the illusion of the world moving around them. The lights turned red, and we had 35 seconds to run out, set the flash, photograph the kissing couple, and run back before the lights changed. We then took several shots of traffic and passersby, and we will used them to build a spectacular photo from Alina and Justin.

With that we wrapped up the session, and Justin and Alina headed off to spend an enjoyable weekend in the Rockies.