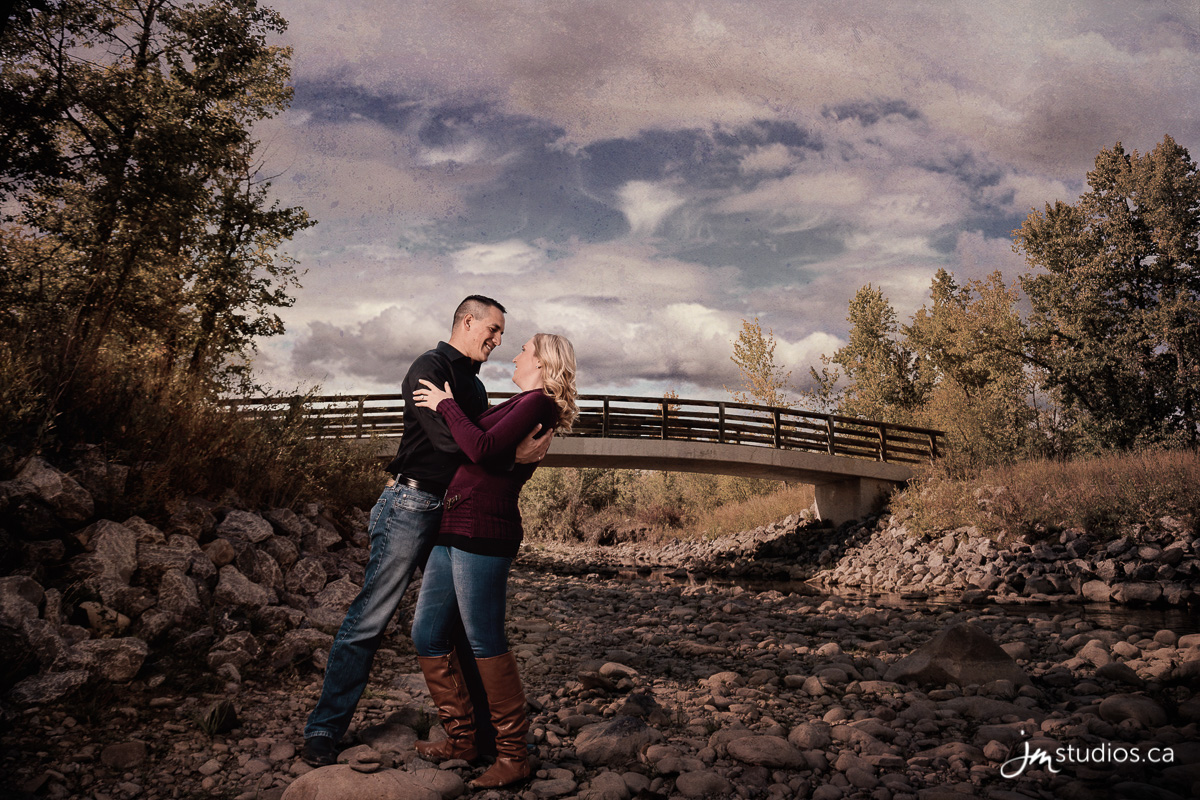 A Day in the Park and the Pub

The Story of Kelsea and Garett

Kelsea and Garett met years ago when they were both attending Central Memorial High School. While Garett pumped gas at the local Shell station, Kelsea developed a bit of a crush. Alas, the spark never led anywhere, and Kelsea and Garett went their separate ways.

Fast forward a few years, and both Kelsea and Garett had signed up on Plenty of Fish. When she stumbled on his profile, the old flame reignited. There he was, single and available!

She sent him a message asking if he was in fact, the same Garett that she went to high school with. When he confirmed it, the two began chatting and made a few attempts at dates before finding success. The first date fell through, so by the second date, Garett knew he had to make it work, even if he was nursing a hangover. They met up at Hudsons, and spent so much time together on that first date that they went through two servers!

Now, Kelsea and Garett have been together for three years, and this past February, he proposed! Almost a year to the day after getting engaged, they will get married. They both want a winter wedding, so it works out perfectly!

We approached Garett and Kelsea’s engagement session in a different way than normal. To begin with, they hadn’t yet told their entire families about the engagement, so they were throwing a party to break the news. Kelsea’s sister Stacy put the party on at Hudsons in Shawnessy, the same pub where the couple took their first date. So, we decided to split their session down the middle. Half of the shoot would be out in the park, and the other half would be at the Hudsons engagement party!

Conveniently close to Hudsons is the gorgeous Glennfield area of Fish Creek Park, so naturally, we began there. We found some shady fields with bright long grasses for our first location. After some fun frolicking in the leaves, we moved down to a bridge over Fish Creek. The weather and the lighting were perfect in the late afternoon sun. We wrapped up the shoot with Garett and Kelsea underneath the bridge amongst sun-dappled rocks.

The Engagement Party at Hudsons Pub

Before entering Hudsons, we set up an establishing shot with Kelsea and Garett in front of the pub. They changed into their matching ‘Bride’ and ‘Groom’ t-shirts, and it was time to party! Near the back of the building, the private room was set up just for them. While they were greeting their guests, the phenomenal staff were hard at work and set up the table where Garett and Kelsea sat on their first date. We took the opportunity to photograph the couple talking and hanging out in the exact spot they’d hit it off three years ago. It was a great experience to recreate the moment with them!

Back in the private room, we congregated for a champagne toast led by Stacy. Platters of snacks and nachos were set out for everyone, and a game of ‘how many candies are in the jar?’ commenced. (There were 147 – the same number of days until Kelsea and Garett’s wedding!) The party was a wonderful way for the couple’s nearest and dearest to meet and get to know one another.

Because their relationship began in the pub, we agreed it would be appropriate to photograph Kelsea’s engagement ring right at the bar. The wooden bar-top was the perfect backdrop for the shiny diamond ring. Our talented bartender poured a few ‘brain hemorrhage’ shots (which look like tiny mushroom clouds), and we used the liquid’s texture as a surreal backdrop. The staff was again fantastic and enthusiastically joined in on the setups. They even lent us play-doh so the ring would sit upright against the shot glass.

We had a fun day with Kelsea and Garett and enjoyed the session both in Fish Creek Park and at Hudsons. We hope they love their images as much as we enjoyed taking them!