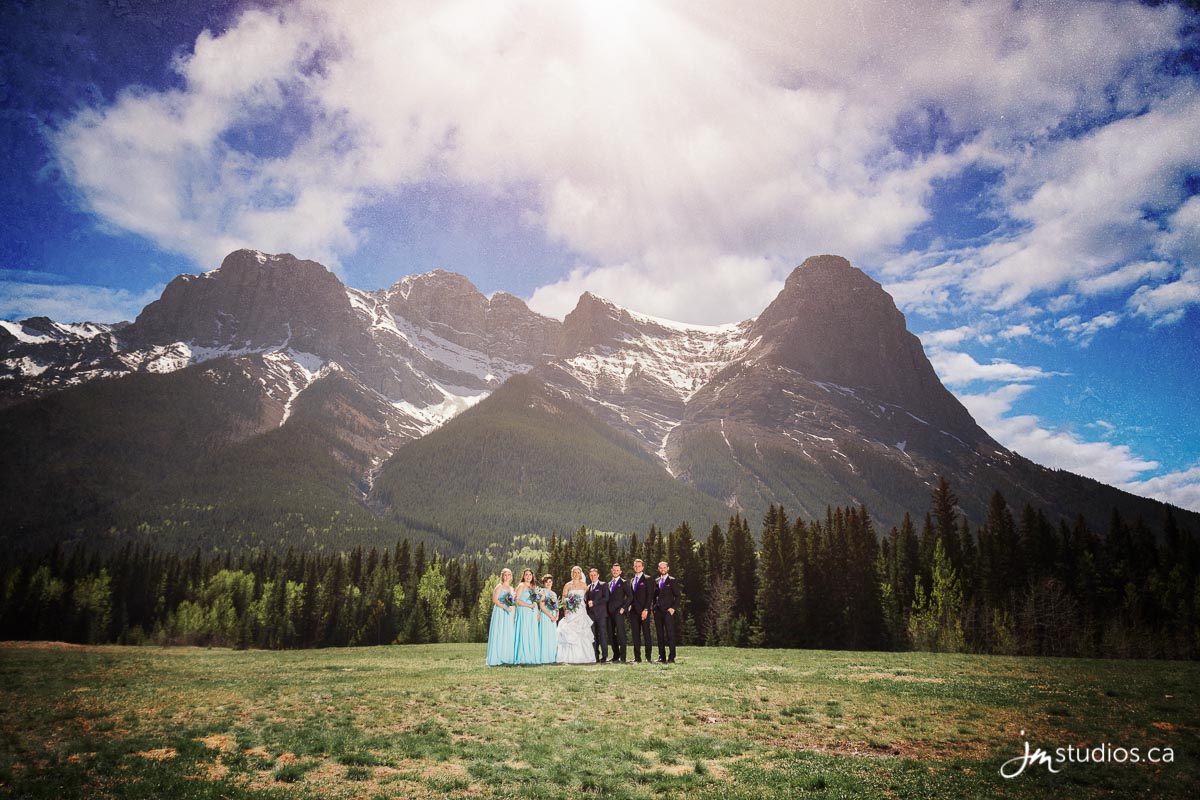 The Men Getting Ready

On the day of JoAnne and Adam’s wedding, we began with the groom and his men down in the basement of the Bear and Bison Canadian Country Inn in Canmore. The vibrant group were already having a blast when we arrived. They wanted to start with ‘jocks in socks’ photos, so they stripped down to their underwear and socks, and posed for the unorthodox portrait. The energy stayed high as they got dressed and ready for the day, and before the finishing touches, Adam sprawled out on the bed for some hilarious ‘boudoir-type’ photos for his bride.

After everyone was dressed and styled, Adam gave his groomsmen their gifts of cufflinks, a tie, and a beer mug with oval emblems engraved with each of their names.

The Women Getting Ready

We transitioned upstairs to the second floor, where JoAnne and the bridesmaids were decked out in their matching robes, complete with each of their names. Already dressed when we arrived, the women were enjoying some prosecco and enjoying each others’ company. Sonja, a good friend of the couple, was amid touch-ups to hair and makeup.

An avid hiker, JoAnne met most of her wedding party either on the trails or by sharing a love of hiking. If they didn’t meet through hiking, they certainly met through an adventure! The girls have a running joke that JoAnne’s hikes tend to put lives at risk, and they all shared irreverent stories about their own close calls on the trail with her. To commemorate this tie, JoAnne gifted them all with mugs that read, “The Mountains Fix Everything.”

As the girls were having a drink, we photographed the rings alongside their beautiful custom wooden boxes. Her ring is a 19th-century family heirloom, and the couple created both an eternity and a wedding band to match.

After photographing the remaining details, including her bracelets, earrings, and shoes, it was time to get into her dress. It was a unique gown, and after finding it online, she had a bit of her own flair added to make it her own. Brogan, the maid of honour, even did a bit of climbing to get some interesting angles of the bride. The whole party was hilarious and incredibly helpful, always keeping posted on the bride. The women made it their mission to ensure she was taken care of.

Once in her dress, both her own mom and her soon-to-be mother-in-law joined us. It was an emotional moment, with lots of waterworks, which continued into the day. After getting the final lace ties on the dress, she had each of the women add a touch to her wardrobe – either putting on shoes, or a piece of jewelry. This gave us an excellent opportunity for some more intimate shots of JoAnne and the important women in her life.

For the first look, we brought Adam up to the grand staircase at the inn, where he waited patiently for his bride. As JoAnne made her way down the stairs from the second floor, Adam was overwhelmed for a moment, letting some of his emotions show through his usually stoic exterior. They shared a private moment together before it was time to head outside for the formal photos.

We drove out to Quarry Lake Park, a recreational area set up jointly by the Rocky Mountain Heritage Foundation and the Town of Canmore. The popular summer location was built around a reclaimed mining quarry and features a beautiful, mountain-fed lake, hiking trails, and stunning views of Mount Rundle, Ha Ling Peak, and the Fairholme Range.

Starting in the dog park, we had a stunning view of the Three Sisters Mountain range. We got the whole party together for a sweeping shot of the group, with a few funny faces thrown in. We wandered over to the lake, where we broke the party down into smaller groupings.

The neighbourhood of Spring Creek was our next location. This recently redeveloped community has become a beating heart in Canmore, with gorgeous walks along the water and a vast network of trails that lead into the centre of town. The area was full of spots for great shots, and JoAnne and Adam were game to try out some of the more obscure locations. Wandering along footpaths and over bridges, we photographed the happy couple in the beautiful May sunshine.

Their Ceremony at The Bear and Bison Inn

Beneath the towering Lady McDonald Mountain, JoAnne and Adam’s ceremony began, led by Anne, a close family friend. She opened with a warm welcome and devotional, followed by a beautiful oration on marriage and life. The couple shared traditional vows, exchanged rings, performed a handfasting, and shared a kiss as husband and wife!

We wrapped up at the ceremony by grabbing an overhead shot of everyone in attendance. The group then headed inside while we remained back with the family for photos. The bride’s cousin Shannon was a huge help, organizing everyone and making sure things ran smoothly.

The Engelbrecht Reception at the Bear and Bison Inn

Dinner, a plated five-course dinner, was phenomenal. The meal itself took place over a few hours and was a laid-back delight. The first round of speeches began after desert, followed by the cutting of the Kake by Darci cake!

After dinner, it was time to get into the dances. The staff turned over the room, and once the dance floor was clear, the happy couple shared their first dance. JoAnne then took a turn with her father, and Adam danced with his mom. The bouquet and garter toss followed right away, and then DJ Ben with Livin’ and Dancin’ DJ Services took it away for the rest of the night! Always a great reader of crowds, DJ Ben maintained the energy, keeping the group up and dancing into the night!

Above you will find the Wedding Slideshow that we created from a selection of the best edited photos that we captured on their special day in the Rocky Mountains.