The Iron’s Wedding at the Calgary Golf and Country Club 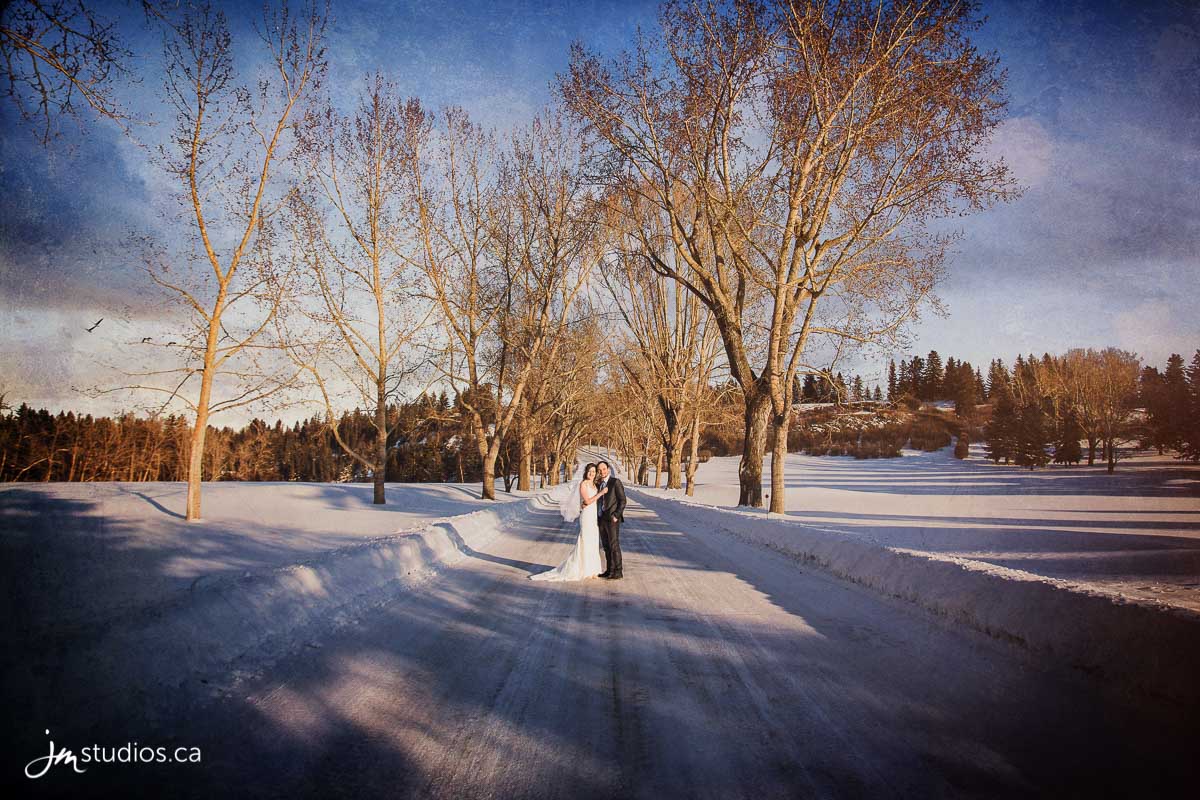 Their Ceremony at the Historic Calgary Golf and Country Club

The day of Challen and Alyne’s wedding was another cold on in Calgary; the temperature dipped well below -20 and felt a bit Alaskan! In the afternoon, we met up with the couple down at the historic Calgary Golf and Country Club. The club was formed in 1897, and the course is the oldest private course still being played in Alberta.

Challen and Alyne entered in, took their place in front of the huge stone fireplace, and the ceremony began, with an intimate guest list of thirty-three people. Alyne’s family pastor Richard Graham officiated the ceremony, while his wife Margaret performed the beautiful accompaniment.

A few pieces of scripture were shared, as spirituality plays a large part in their lives. The couple first met at Bible College and struck up a friendship. After college, they each took some time to wander the world, discovering what it could offer and what they could offer it. Throughout the service, the strong theme of their generosity and care for others carried through.

Upon returning from their individual travels, their friendship changed, evolving into a romance. As Alyne’s sister Alana later said in her speech, these two wanderers will now wander the world together.

They said their vows – traditional with a kiss of personalization – before signing their documents and becoming husband and wife!

Following the service, Alyne and Challen had time to mingle with their guests before family photos. The families were natural subjects, and a lot of fun to work with.

The Creative Formals in the Calgary Golf and Country Club

For the creative formals, we primarily used the interior of the Calgary Golf and Country Club, as winter was in full force. And the indoors served us well, as the club has a beautiful interior, with beautiful stairways, stunning woodwork, and flagstone walls. One set of large windows created the illusion that the couple was outdoors, while they could remain toasty inside.

But after seeing the beautiful outdoors, the couple decided to go for it, and braved the winter chill! Along a snowy tree-lined pathway, the long shadows of the setting sun created a beautiful backdrop. As the newlyweds shared a kiss, the sun shone behind them, making for a stunning shot!

The Iron Reception at the Calgary Golf and Country Club

Once we had wrapped outside, it was time to head back into the warmth for the grand entrance! Everyone sat down for a delightful dinner provided by the Calgary Golf and Country Club. The meal kicked off with a salad with blue cheese, avocados, and tomatoes. The main was salmon atop a bed of rice and vegetables, and a delightful chocolate pie rounded out the meal.

After dinner, speeches commenced. Both sides have religious backgrounds, and their speeches centred on spirituality. Alyne’s dad spoke of how exceptional she is, and how proud she makes him.

Challen’s father began his speech by saying that his own words would not do justice to what he wanted to say. Instead, he read carefully selected passages of scripture that reflected and spoke to his son and new daughter-in-law.

Challen’s best man Mike spoke about how Challen has been such an important role model and leader in his life. Alyne’s sister Alana followed with her maid of honour speech, highlighting Alyne’s gentle personality and pulling a quote from the Fellowship of the Ring.

After wrapping up the speeches, Alyne and Challen kicked off the dance. They split their dance into two, beginning with a romantic twirl to Adele, and shifting gears to a swing dance, to Blue Swede’s “Hooked on a Feeling.”

To wrap up the evening, we set up our few final shots by the grand piano. Both Challen and Alyne play so it was a great backdrop to end the night. Alyne’s family says that when she was a young girl, you always knew she was happy when she filled the house with music.

From there it was time to say goodnight to the newlyweds. We had a beautiful day with Alyne and Challen, and wish them an incredible life of wandering the world together!

Some of my Favourite Photos from Alyne and Challen’s Wedding