The Jubb-Gartner’s Banff Wedding at the Rimrock Hotel 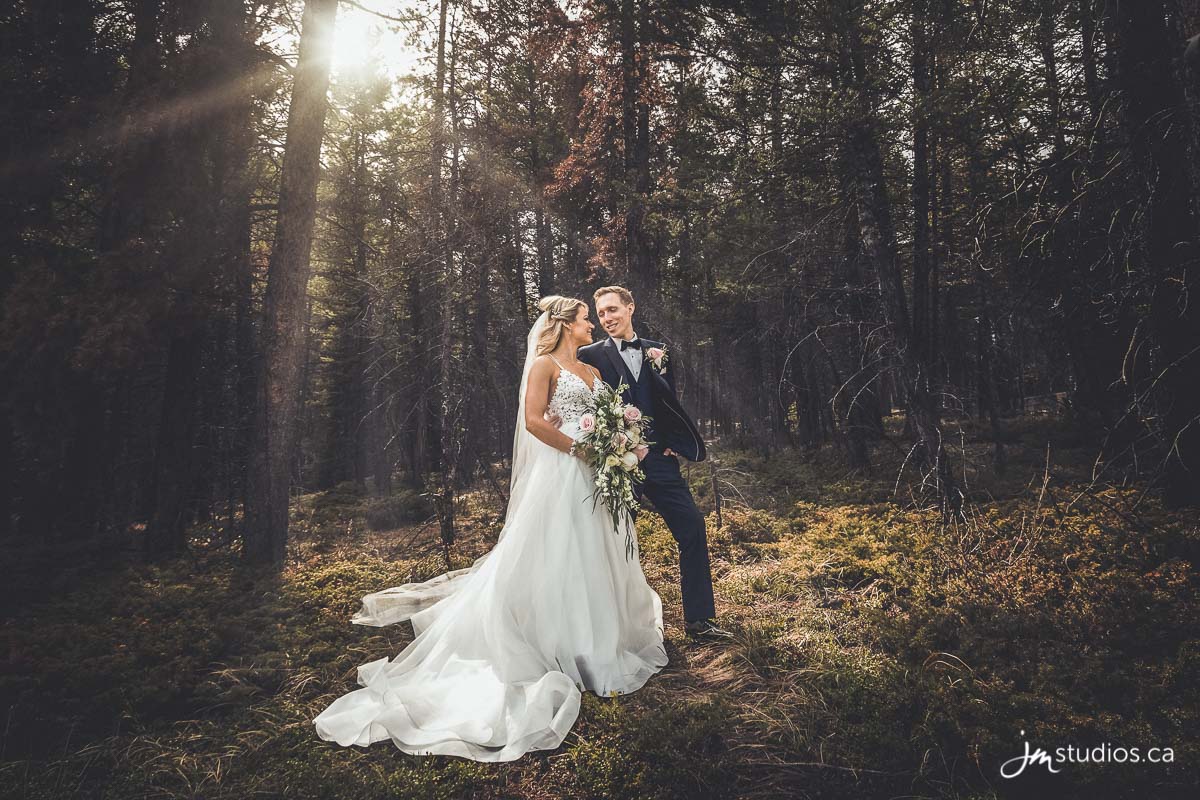 A Spectacular Wedding In The Heart of The Rockies

The Groom Getting Ready

On the day of Carolyn and Evan’s Rocky Mountain wedding, we drove up to meet the couple at the Rimrock Resort, the exceptional four-diamond hotel nestled in the heart of Banff National Park. On the fourth floor, we were joined by videographer Ryan of RD3 Productions, who was an excellent teammate and helped build a flow that lasted throughout the day. The guys were getting ready, tying their bowties and fastening their cufflinks. We photographed as they put on the final details and laced their shoes. As Evan opened his gift from Carolyn, we had a sneaking suspicion as to what it might be, as we’d seen a gift like this before. So, we gently let him know he should open it in private, and he held it to his heart. His best man Nick had a running joke that he and the groom would get married, so he ribbed his friend, saying it was actually a ‘dudeoir’ photo shoot of him instead.

The groomsmen opened their gifts, each a flask with their favourite beverage. He had them guess what was in each one, and they nailed it every time. Included in the gifts were handwritten cards, and it was clear to see that Evan cherishes every one of those guys. They shared hugs, and he proceeded to pour them each a glass of bourbon.

The Bride Getting Ready

We left the guys and joined the women, who were already finished with makeup. Both the stylist Sara of The Hair Company, and makeup artist Bobi Miron, were incredible. Bobi went above and beyond, helping Carolyn steam her dress, tidy the room, and functioned as a de facto wedding planner. Throughout the day, everything was on time, and the details were on point. Even the stunning flowers had been driven all the way into Banff from Brooks Greenhouse by a family friend!

Carolyn then opened her gift, which was also a book. However, instead of photographs, this book was filled with quotes about love. She saved the majority of it for later knowing she would cry when she read it.

She gifted her bridesmaids with Nike running shoes, a cool and unique gift. The women were ecstatic about them! She also included a water bottle, a set of earrings, and a rose gold bracelet with their initials engraved. And as Carolyn is vegan, she gave the girls cards, each with cute illustrated fruits and vegetables, such as ‘I Love Lettuce,’ and ‘I’m Bananas About You.”

With the gifts opened, Carolyn changed into her dress, and we photographed her mom fastening the back. Once she was done up, we popped out onto the deck for the surreal view of the Rockies. The sun was shining brilliantly, casting a fantastic light. After working on a few different setups for the light, we settled on a shadier spot with a backlight and captured the magic of the bride against the sunny mountains.

Their Ceremony at St Mary’s Parish

When we had completed our shots of the bride, we all headed out to St. Mary’s Parish for the ceremony. Later in the evening, the emcee Mark revealed that his family history was intimately tied to the church. His great grandparents had immigrated from Italy to Banff, and later on, his grandparents had helped build the original parish and were married there. His parents were married there, and finally, he had been baptized there.

St. Mary’s Parish is a gorgeous stone building in the heart of the mountains, and stepping inside was like stepping into a photographer’s dream. The lighting was to die for, the stone interiors lit by vibrant stained glass windows, and the entire altar illuminated by bright lights up front. The silhouettes that formed at the back were just the cherry on top.

Father Dan of the parish began the ceremony and performed a homily in the fantastic acoustics. He followed with a few readings and led the couple in a set of traditional vows. The service was short and sweet, ending with a kiss and their recession down the aisle and into the bright Banff skies.

Family photos followed. Carolyn’s sister Christie was recently married as well, and we were lucky enough to photograph for them too! For both weddings we attended, their 94-year-old great aunt Betty made the trek from BC to be there. All of the girls in the family have also been married wearing her ring!

Typically, Tunnel Mountain Reservoir is busy with weddings, especially on a bright sunny day. But when we rolled up with California Limo, it was quiet, save for a few bikers. Tunnel Mountain is an exceptional place, and we were incredibly lucky to have the area mostly to ourselves! The mountain, also known as Sleeping Buffalo, makes for a beautiful backdrop, the dramatic slope surrounded by Banff National Park and townsite. With the wedding party, we walked along the ridge and photographed them with the sweeping mountains in the distance.

Moving down into a forested area with the newlyweds, we again found dramatic lighting. It was our lucky day. The light coming in through the trees was dreamy, settling onto the frost that dusted the forest floor. We spent most of our time around Tunnel Mountain, before heading over to the Banff Springs Hotel for a few shots in front of the iconic building.

We returned to the Rimrock Resort, and the couple stepped away to refresh before the reception. In the meantime, we headed straight to the Wildrose Ballroom, where every detail was ready to go. The room was beautifully decorated, with ample greenery such as ivy, and with a stunning view of Mount Rundle.

Carolyn and Evan made a quick entrance, moving out onto the dance floor to kick things off. Dinner followed shortly, and guests were presented with an incredible menu of delicious food! The meals began with either a green salad or bocconcini and tomato, followed by tortellini, prime rib, and scalloped potatoes, or chicken and fried gnocchi. Dessert was a delicious banana chocolate coffee cake.

Between the courses, the speeches commenced, starting with the parents. Carolyn’s dad reminisced on first meeting Evan. Before Carolyn brought him over for the first time, she described her date as short but well built and good looking. When her dad met him and verified his appearance, the two men immediately had something in common, because her dad said he is also short, well built, and good looking!

Next, the maid of honour Jessica stood for her speech. She and the bride have such a sweet and loving relationship; apparent in the well-told story of their long friendship. The two have been inseparable, and Jessica even played a part in the newlyweds getting together. It was after Jessica’s invitation on a Missions trip that Carolyn first saw Evan walk in at orientation. For the rest of their journey, they were trying to figure out if he was single, to little success. Finally, as the trip and Carolyn’s nerves were coming to an end, she buckled down and asked him. The friends still enjoy travelling together – their slideshows and videos chronicle a friendship that crosses borders the world over.

Nick, the best man, also told of he and the grooms own long and storied friendship. On their first trip abroad, Evan wanted to go solo, but after a week, and at the gentle nudging of his parents, he asked his friend to join him. It was on that first trip that the became as close as brothers, a bond that still holds to this day. Nick thanked Evan’s parents during his speech, saying it was because of them that the two men are the best of friends. It was clear from the emotionally charged statement that this bond is one of admiration and respect, and it runs deep.

When he finished his speech, emcee Mark had something waiting for him. Apparently, Nick can finish a drink instantly, the ability almost magical. So, out came a Smirnoff ice. To open it, Mark utilized a trick that they had learned together in Taiwan – how to open a bottle with a piece of paper. If you fold the paper many times, the reinforced edge is strong enough to pop the cap. However, on this occasion, in front of an audience, it didn’t work! So after a few wounds, the men finally opened it, and sure enough, Nick drank it down in one swallow. These shenanigans continued into the night, when they successfully ‘Iced’ both Mark and Evan, Mark at the dance, and Evan, finding a bottle tucked into his wife’s garter! Thankfully, bottle openers were on hand.

DJ Ben of Livin’ and Dancin’ DJ Service kicked off the dance, and read the crowd exceptionally well, keeping the tunes coming and the party going! The photo booth was set up, and the Polaroid prints were stuck into a guestbook, featuring photos of their engagement session. Under the photos, guests left messages for the newlyweds. After a successful pizza bar, the dancing continued into the night!

We had a beautiful day with Carolyn and Evan, and hope they enjoy their images as much as we enjoyed their wedding!

Above you will find the Mountain Wedding Slideshow that we created from a selection of the best edited photos that we captured on their special day in the Rocky Mountains.