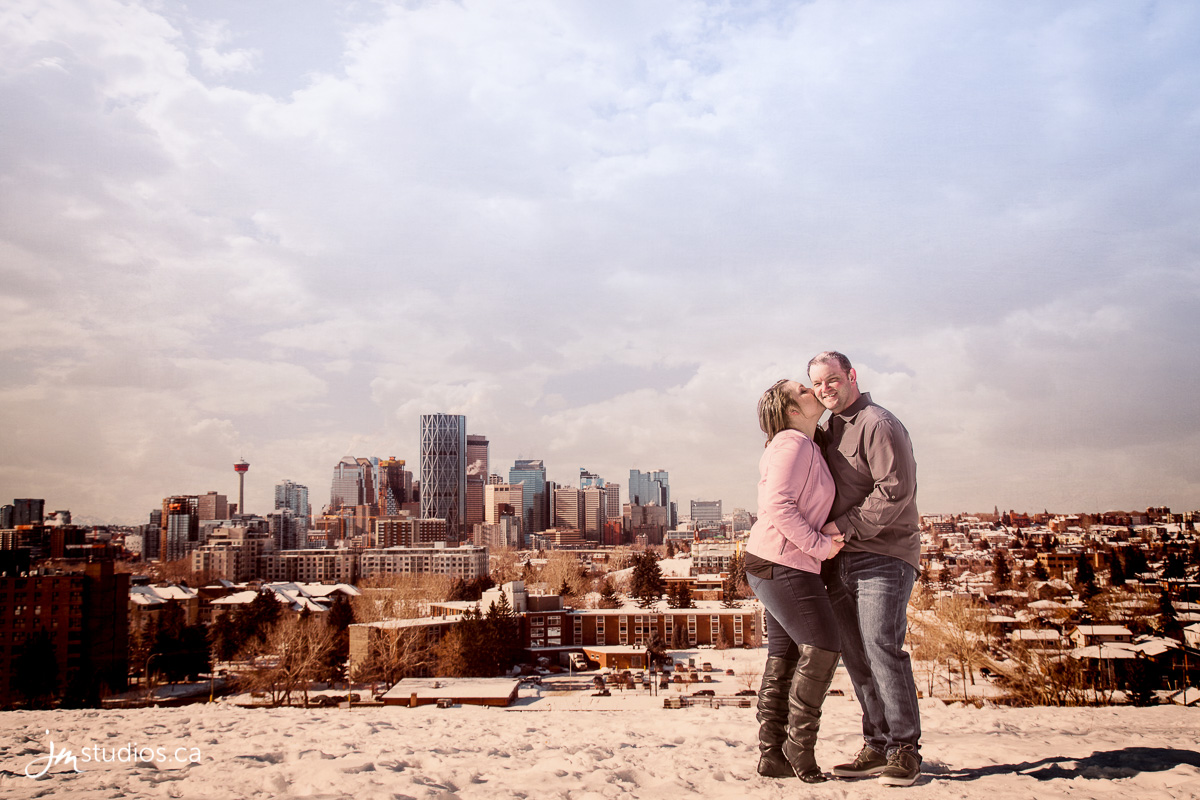 Bre and Joey met in school in the year 2000, when she was in ninth grade, and he was in eleventh. They first became friends, but eventually, both single, they went to a party together and hit it off. They have been together ever since.

After knowing each other for nearly sixteen years, Bre had given up on getting engaged. She was eight months pregnant with their now two-and-a-half-year-old Cali and wasn’t expecting a proposal. Everyone else around them knew it was coming, except for Bre’s sister Paige, who’s fiancé Michael had his own proposal in the works. Oddly enough, the guys both chose the same day to propose!

When Joey was heading up to work in Fort Mac, he was overcome with the urge to call Bre’s dad. Just before stepping on the plane, he called and asked for permission to marry Bre. Her dad, who had known Joey a long time, gave his blessing immediately.

Because Banff holds a special place in the hearts of both Joey and Bre, that’s where he wanted to do it. They drove out to Bow Falls, and on February 14th, he took the plunge. Meanwhile, Paige and Michael were getting engaged too!

While Bre, eight months pregnant was watching other couples around the falls get engaged on Valentine’s Day, she lamented the fact that they weren’t. As she was looking out to the falls, pointing to a newly engaged couple, Joey knelt behind her, ring in hand.

Turn around, he said, and when she did, surprise and excitement overwhelmed her! Of course, she said yes!

The day began in Airdrie, where Joey and Bre live. Michelle Walsh of Michelle Suffolk-Walsh Hair and Makeup was finishing Bre’s style when we arrived.

From there we drove out to Tom Campbell’s Hill Natural Park, just west of the Calgary Zoo. The dog park has a gorgeous view of the downtown Calgary core, which made it the perfect spot to start with a family session.

Cali was dressed in an adorable Jackie Onassis-inspired look, complete with a hat and jacket. Because it was chilly, we photographed the family quickly, making sure Cali wouldn’t be exposed to the cold for too long. After the family shoot was done, Cali’s grandma and aunt picked her up, and we headed deeper into the park with Joey and Bre.

A nearby abandoned tunnel was our destination. It took awhile to manoeuvre inside due to all the snow, but once we did, the sheer size of the tunnel left us in awe. At nearly 20 ft high in the middle, with graffiti splashed against the walls, the space had a unique urban vibe, which made for some great shots. Again, because of the cold, we didn’t linger too long.

To beat the chill, we ironically headed to a brewery named Cold Garden. The microbrewery in Inglewood is dog-friendly and offers eclectic brews such as a vanilla cappuccino porter, a saison with Saskatoon berries, and a vanilla bean laced Marzen. The folks at Cold Garden were incredibly hospitable, and let us linger and photograph for hours. We ordered a few flights of beer while we warmed up.

The decor of the place is unique. Bre found some chalk and drew on the blackboard wall “Joey+Bre” with their wedding date scrawled beneath. We took some photos with the sign in the background and then moved around the space to use all the amazing spots throughout the brewery as backdrops.

After we wrapped up at Cold Garden, the session came to an end. We all headed home, warm and cozy.