The Radomski’s Engagement Session at The Bow and Stephens Ave 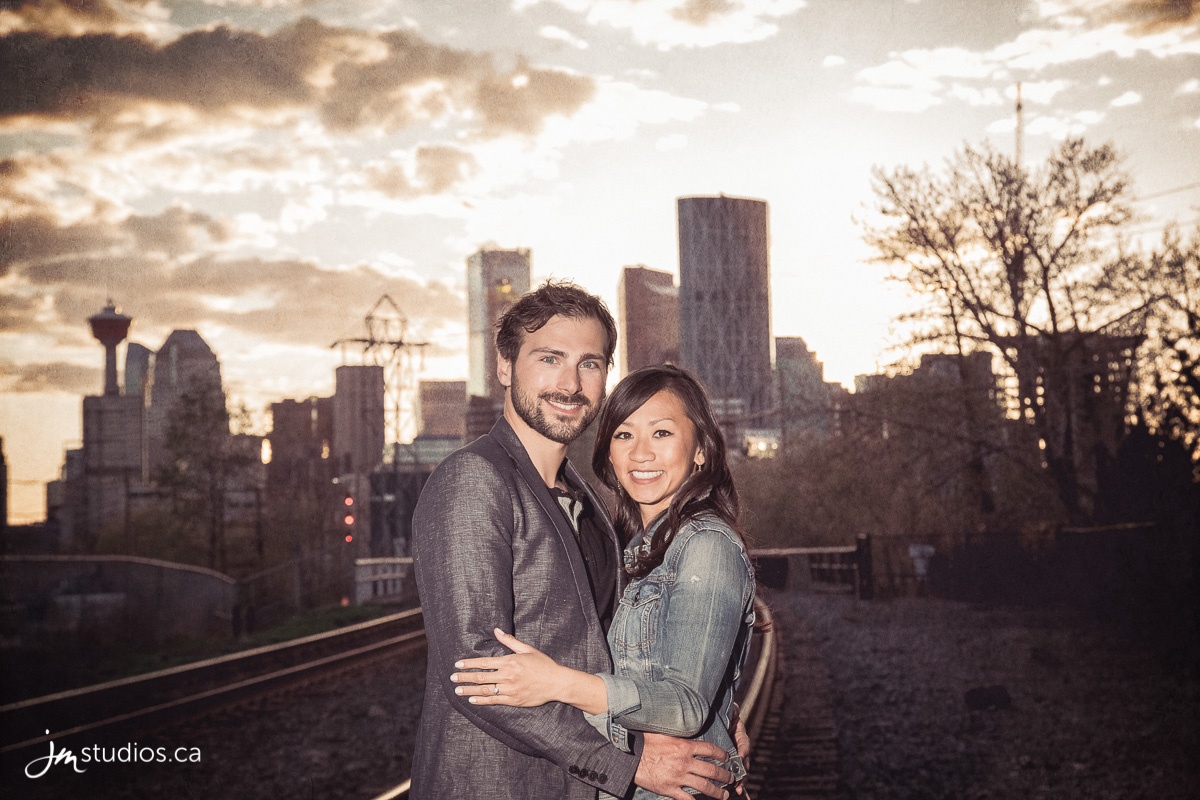 In 2005, Jemmica and Jonathan met through mutual friends and found themselves at many of the same shindigs! Jem and Jon were both attending Mount Royal University, he in Sport Business Management, and she for Interior Design.

It took a long time for their friendship to evolve into anything more, but when they finally did come together, their friends joked that it was about time. After 10 years of steadily growing closer, they finally made it official and became J-Squared.

Even before they began dating, Jon had mentioned that he would marry Jem, so it was no secret where this relationship was heading. When he was finally ready to buy a ring, he enlisted the help of his sisters and designed a beautiful custom ring of a solitary diamond and topaz insets.

Over the Christmas holidays in 2017, Jon and Jem went backpacking in Mexico for 3 weeks, and he had full intentions to do it then. It was brave of him to backpack with an engagement ring, but he says that if he would have lost the ring, then it wasn’t meant to be.

For the majority of the holiday, the couple stayed in hostels, and Jon could never find the right time to pop the question. But, finally, on December 27th, the moment came. That morning they stopped in a coffee shop and while they were sitting, the Phil Collins song “True Colors” came on. It spoke to Jon and he knew the day had come. The two went for a nice dinner, and when they came back to their room, he dropped to one knee and proposed. Because of the nature of the trip, she had no idea it was coming and was completely surprised! And of course, she said yes!

The Engagement Session in Downtown Calgary

For Jem and Jon’s engagement session, we met them at Société, a multi-roaster coffee lounge in downtown Calgary. Everyone at Société was wonderfully helpful, and even let us stay in the shop after closing time so we could get the photos we needed!

The space was great to photograph, with unique details like burlap coffee sacks on the walls, and a clean industrial vibe.

We moved on from Société and headed over to the graffiti wall in Chinatown near the Bow Building. Using lights, we created a moody atmosphere against the colourful walls.

From there, we went to Eden Nightclub, who graciously let us use their unique back alley with amazing red brick structures and metal staircases. While in the area, we popped over to the new Telus Sky Tower, which is a mix of efficient residential and commercial units. The building is a beautiful addition to the Calgary skyline, and the glass structure was the perfect addition to our photoshoot.

Our next location was by request of Jem, who herself practices photography in her spare time. She loves walking around the city and uses her creative eye to find beautiful locations, which is precisely what happened when she was wandering around Inglewood and came across a set of train tracks. The tracks roll right up to the back end of downtown, and she thought it would make the perfect spot for an engagement shoot.

We parked down at Cold Garden, the eclectic micro-brewery that serves up a unique selection of beer, and walked to the spot she’d discovered. It was an absolutely breathtaking setting, and with fluffy golden clouds hovering over the setting sun, we got some stunning shots of Jem and Jon. To wrap up the day, we headed back to Cold Garden for a drink and said farewell to J-Squared.

We had a wonderful evening with Jem and Jon, and hope they adore their images as much as we loved photographing them.