The Rose Winter Wedding at The Lake House in Calgary 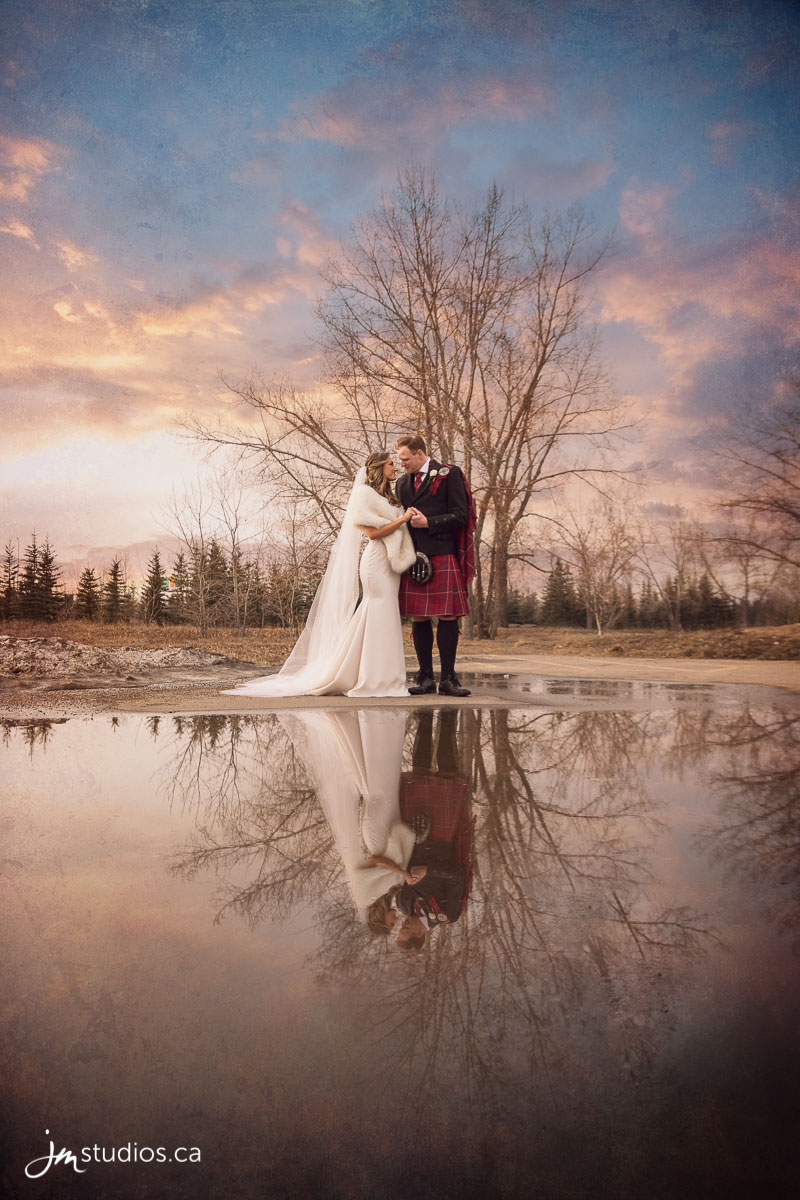 A Hint of Scotland in the Rose’s Spring Wedding

The Groom and His Groomsmen Getting Ready

On the day of Stuart and Kristi’s wedding, we began at their home, where the groom and his men were getting ready. Rugby was on TV, harkening back to Stuart’s youth in Scotland, where he played for the Scottish National U19 team. This impressive athletic accomplishment took him all over the world, including a trip to South Africa! So, needless to say, rugby has played an important part in his life.

As most of his groomsmen were also from Scotland, they were each dressed in a kilt and sporran. Because he finds it somewhat uncomfortable, Stuart sported a sgian-dubh, a small, useful dagger, for the photos only. To round out the outfit, his mother helped him fasten his kilt pin, complete with a clan crest.

Once they were all dressed and ready to go, the boys cooked up some eggs and cracked the whisky. Before we headed to meet the girls, Stuart gifted each of his groomsmen a personalized round kilt flask – made in Scotland.

The Bride and Her Bridesmaids Getting Ready

Then we headed over to Fairmont Palliser, the luxurious historic downtown hotel, where the women were getting ready. The women, too, were ready when we arrived, setting the trend that the rest of the day would be just as organized, relaxed, and easygoing.

Makeup and hair were nearly done, so we staged a few shots of those finishing touches before moving on to the little details of the day. Kristi is a very creative person, and with her admired linguistic skills, she often pens poems or touching passages to friends and family in all cards she gives. The general consensus is: if you get a card from Kristi, you’re almost guaranteed to get choked up. So, as her gift, she wrote out cards to her bridesmaids, along with matching ‘bridesmaids’ jackets, earrings, and Swarovski bracelets.

Just after their engagement, Kristi bought her first accessory… when she fell in love with a stunning pair of Louis Vuitton heels. The sparkling shoes were tons of fun to photograph, especially with the addition of her grandmother’s black diamond ring on top. This exceptionally attractive diamond-shaped heirloom has been worn by all the women in Kristi’s family on their wedding day, and she continued the tradition.

Then we photographed her beautiful jewelry; bracelets, necklace, earrings, rings, and garter; before shooting the piéce de resistance – the dress and veil! Her bridesmaids helped her with her buttons on the beautiful lace top and fastened the veil. After a glass of champagne, it was time to head to the ceremony!

Their Ceremony at St. Gerard’s Church

St. Gerard’s Church is a huge part of Kristi’s family; they attend regularly, and her father does lots of work for the church, so the connection is significant. Father Tran led the ceremony, kicking things off with a beautiful homily, which was so reflective of the couple that they thanked him for his choice afterward. They followed a traditional Catholic service, with readings interspersed. They wrapped with a set of traditional vows, signed their documents, and were officially married!

After the ceremony, we brought the family up in front of the altar for family photos, which much like the rest of the day, ran incredibly smoothly. Part of this was due to all the work of the maid of honour Claudia, who did an excellent job of pulling the group together.

Family photos finished, we drove down to Fish Creek Provincial Park, Glennfield Area A, coming across a herd of deer as we arrived. Spirits were high as we wandered down from the parking lot and through the thawing park, coming to a pedestrian bridge that spans the creek. We photographed the entire wedding party along the bridge, before noticing the flowers had been left in the limo! Taking it upon herself, Lynn, Kristie’s new sister in law and wife of the best man, risked her own feet and ran back for the bouquets!

With the flowers back in hand, we strolled along the park paths, under a soft light created by the backlit overcast sky. We said goodbye to the wedding party and moved further into the park with the newlyweds. While Kristi’s shoes were gorgeous, they weren’t built for long walks through the park. Groomsman Jordan ran her down a pair of flats, which were much more spacious and comfortable. With fresh footwear, Kristi and Stuart walked down to where Fish Creek meets the bridge at Macleod Trail. Beneath the bridge, the space between the two highways allowed a little moody, diffused light to seep through, giving us some incredible shots.

We wandered back up the path, stopping along the way to use the trees as a backdrop. To wrap up the creative formal session, we stopped at an expansive puddle, Kristi and Stuart reflected in the still water.

The Rose Reception at The Lake House on Lake Bonavista

For the reception, we headed over to The Lake House, perched above Lake Bonavista. The venue, with antler chandeliers and gorgeous views of the lake, is a unique and elegant setting, with a grand stone and brick fireplace as the focal point. The place really transports you somewhere else. Kristen, Kevin, and the entire team at the Lake House were incredibly accommodating, and it was clear they were there to make the day run as smoothly as possible for Kristi and Stuart.

The reception kicked off with a phone call from Adam, a close friend of Stuart’s. Having recently moved to France, Adam could not attend the wedding, so he called in on speakerphone to share a few entertaining stories. He spoke of a time he dubbed their ‘Brokeback Mountain’ trip, when they were airlifted into the wilderness and spent ten days together living off the land. They had some difficulty getting food because neither of them could fish, and they had no ammunition for their gun.

Sinking as soon as they put it in the water, they quickly gave up on the boat.

Eight days into the trip, they were looking for some entertainment. They’d brought along a copy of The Lord of the Rings, and instead of reading it aloud to one another, Stuart suggested they act it out. Adam wasn’t keen on the idea. Stuart told him he could do whatever he wanted, but either Adam pick up a stick, and they have a swordfight, or he would simply be hit by a stick. And so wrapped up a humorous retelling of their wilderness adventure, highlighting some of the quirky things people like about Stuart.

After the call in, dinner began with a choice of tasty mushroom soup and house croutons, or a fresh tomato salad. The main course of steak or chicken was brought out, with broccoli, potatoes, and mushrooms. Speeches from various members of the wedding party continued throughout dinner, all sharing wonderful stories of childhoods, first meetings, and shared experiences. The central theme was how generous Kristi and Stuart both are, and how they will carry that generosity and kindness into their marriage. They both have very loving families, who care a great deal about them. Her brother joked that she has a tendency to skip out on dishes, but otherwise, she is a great sister.

Kristi’s parents were excited to welcome the new members of their family. Stuart and Kristi lived with her parents for a time and loved his funny quirks, including a daily rendition of ‘Oh Canada,’ with compliments to Kristi interspersed.

Stuart’s mom flew out from Scotland and spoke very highly of her new daughter-in-law, mentioned how wonderful it is that he found love in Canada.

After the speeches, Kristi and Stuart thanked everyone. They were incredibly grateful to their guests and took the time to thank all the vendors individually. They let them know how appreciative they were of their work, and how much of a difference they made in their day.

The dessert table came out, and the cake was cut. We played our same day slideshow, with help with music from the talented DJ X-Press. Then, it was time to hit the dance floor! DJ X-press took us into the main dances, starting with the father-daughter and mother-son dance. After the first few dances, Stuart’s father took over, and a live band played traditional Scottish songs. While the music played, Stuart’s dad taught Scottish dancing to the high energy group! And that was the party!

We had a beautiful day with Kristi and Stuart, and hope they love their images as much as we loved capturing them!

Some of my Favourite Photos from Kristi and Stuart’s Wedding