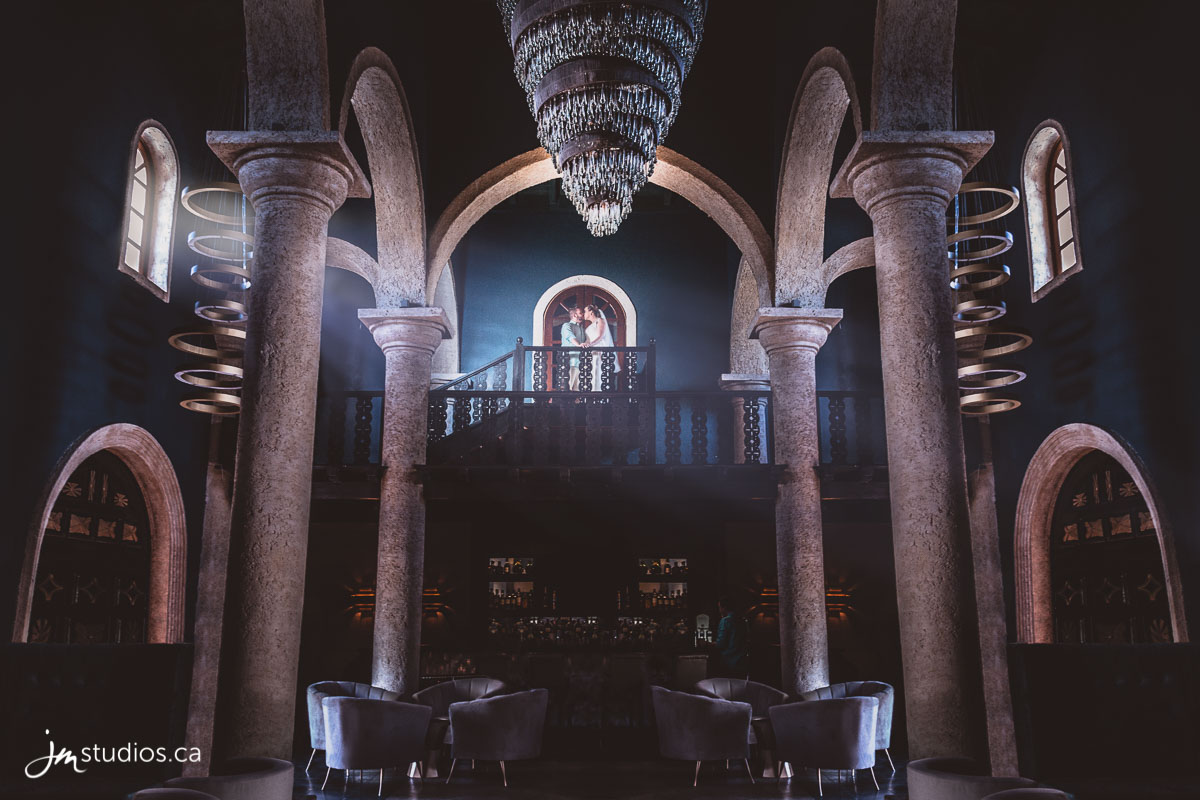 A Glamorous Wedding in the Heart of the Caribbean

Down in the heat of Punta Cana, in the Dominican Republic, we met the bride and her bridesmaids bright and early, in the spa at the Sanctuary Cap Cana Resort. The resort is a gorgeous place with endless things to do, designed with Spanish colonial architecture, rich wood accents and tropical vibes filling the place to the brim.

The Sanctuary Spa itself was an oasis, with fantastic, lush greens, cabanas, and a poolside. Our bride Melissa, her mother, and her bridesmaids were getting the complete treatment, from hair and makeup to mani/pedis!

Just outside the spa is a beautiful water feature, which created the perfect ambient sound to accompany their morning. After photographing the prep, we headed over to join the guys.

Mitch and the guys were getting ready in his parent’s room, just down the hall from the honeymoon suite where the women would mosey over too after their spa morning. His parents Jeff and Maryann were with them, and they were just putting the finishing touch on the speeches when we arrived. Then, it was prep-mode, and as the guys started to get into their suits, room service showed up with a bottle of bubbly. Mitch did the honours, and after sharing a drink, steaming all the shirts, and fastening the ties and shoes, they had some time to relax before the ceremony.

Out the back of the room is a grassy patio overlooking the sea. The group cracked a few beers, and we used the stunning backdrop for some shots of the groom and groomsmen in their Tommy Bahamas before heading down to the honeymoon suite.

The room service lunch had just arrived, and since we were running ahead of schedule, the women had a chance to enjoy a languid lunch. Once everyone was fed, it was time to get the bride into her dress. The honeymoon suite features a private pool space, which was the perfect change of scenery for the girls to get ready in, with sparkling water and beautiful stone columns. Before she changed into her dress, we hung it up in the open window, a brilliant white against the Caribbean Sea. With some help from her mother, Melissa then got into her beautiful gown, and we followed by photographing her accessories and jewelry. Then, it was time to do a few last photos with the bridesmaids before setting up for the first look!

The First Look Overlooking the Ocean

Out on the grassy veranda, overlooking the junction between the Atlantic and the Caribbean Sea, we set Melissa up between two swaying palm trees. After closing the windows, we invited Mitch’s sister Jen, the videographer of the day, to join us for the first look.

Mitch arrived and wasted little time in opening the doors to his beautiful bride. He walked across the lawn to the edge of the beach and tapped her on the shoulder. We stepped away to allow them a private moment before the family and wedding party joined them on the veranda.

The Creative Formals at the Sanctuary Cap Cana

Part of the Sanctuary Cap Cana is designed to look like a castle, with turrets and all, so we utilized this exceptional piece of architecture in our creative formal session. In the heart of the resort, an Eden like green space lined with columned archways, rock walls, and waterfalls, gave us a jaw-dropping landscape. From there, we headed into the piano bar at the resort, whose tall, modern columns echoed the garden. Mitch and Melissa stood high up on the balcony, and we photographed them from beneath the stunning chandelier.

To beat the heat, the party went back to the honeymoon suite to relish in the air conditioning. Once they were sufficiently cooled, Melissa’s dad John joined them for a first look of their own. He is a man who wears his heart on his sleeve, and when he saw her, he needed a moment to catch his breath.

Their Ceremony on the Sanctuary Cap Cana Pier

On a pier outside of the Blue Marlin Restaurant, Mitch and Melissa’s ceremony took place. Under the tall palapa thatched roof, an archway was set up, the aisle leading up lined with rose petals. The venue has the added benefit of having removable walls, allowing the space to look out on to the ocean, while still blocking the strong sea breeze.

Seats were set up for their twenty-four guests, and the lighting was magical. The ceremony began, and using the walkway from the Blue Marlin, the groom and wedding party entered the palapa. Then, the bride and her father made their entrance.

A year before this ceremony, Mitch and Melissa were married in a civil ceremony. So, on this, their first anniversary, they decided to have their wedding in the Dominican. It was a great way to do a destination wedding and gave the whole day an extra level of relaxation. They performed a Dominican hand ceremony, holding hands and discussing the importance of marriage. It was a beautiful ceremony, and at the end, Melissa threw her arms around him, and they shared a kiss!

After the ceremony, a cocktail bar was set up, and the guests were given time to mix and mingle. We spent some time on the balcony with the guests, photographing all the couples with the sea as the backdrop. Having the chance to photograph all of the guests was a great experience and made for some enjoyable photos!

The Sawatzky Reception at the Ocean Club

Heading onto the third level of the castle to the Ocean Club bar, which features a pool and deck looking over the ocean. Even though there was a sixty percent chance of rain that day, Mitch and Melissa were determined to have their wedding outside.

When the couple arrived, they shared the first dance, and then it was time for dinner. While everyone had a bite, speeches commenced. Tara, the maid of honour, began, addressing both Melissa and Mitch. Everyone in the wedding party has known each other for a long time, and the longevity made for some wonderful stories. For example, as kids, Tara and Melissa played a ton of Mario Kart, and she joked that she always looked at the wrong screen, confusing her direction in the game. No wonder Melissa always beat her! She heartwarmingly told Mitch how much she appreciates his commitment to her best friend, and it was clear to see what high regard she holds them both in.

Mitch’s best man and cousin Lee then got up. As they are close in age, they are not only best friends, but they consider each other brothers. Lee shared a hilarious anecdote with the guests – when the two were boys, they took their love of Reese’s peanut butter cups to the next level and tried to make their own at home. They attempted to make them in the microwave, but something went seriously awry, and the oven began to spark – a potential catastrophe. Instead of letting the entire house burn down, they abandoned their mission, opened the windows to let the smoke out, and rode off on their bikes, hoping they could get away with it. According to the looks of surprise on Mitch’s parents faces all these years later- they did.

Melissa’s brother Zach then got up to speak. The siblings have a close relationship – so much so that he brought his sister in for show and tell in the first grade! Zach is a lover of historical trivia, so he incorporated that into his speech. He listed several vital moments in history and tied everything together by saying that everyone in attendance was witnessing history in the making, as Mitch and Melissa were united as husband and wife.

Her father and his wife Julia followed, keeping to a short and touching speech. Her mother Jen and husband Dave got up to speak as well and welcomed Mitch’s family into their awesome blended clan.

Just as Mitch’s family stood to return the sentiment, the skies opened up, and the rains came. Everyone quickly made their way inside, mere seconds from being thoroughly drenched. After we’d set everything up again in the Ocean Club, we resumed. His sister Jen spoke first, followed by his parents. They started by saying they wanted to talk about his first kiss, making everyone in the room a little nervous! But they pulled a fast one, joking that his first kiss was actually with his cousin Lee when they were babies when Mitch crawled over and bit him on the cheek! His dad was reasonably quiet throughout the speech, but his mom Mary Anne passed the mic over just as they were wrapping up because he wanted to have the final word. He smiled and finished the speech by addressing Melissa. “I just want to let you know that you made a choice to marry him. He’s yours now.” The room erupted into laughter.

When the speeches wrapped up, it was time to party into the night, and after hooking up the iPod and getting the music going, everyone did just that!

We had a fantastic time with Mitch and Melissa in the Dominican Republic. We wish them many years of health and happiness and hope they love and cherish their images for years to come.

The Sawatzky Destination Wedding in the Dominican Republic at the Sanctuary Cap Cana2019-06-252019-06-26http://dev.jmweddings.ca/wp-content/uploads/2018/12/jmstudios_logocircle_purple_menu_70px-2.pngJM Weddingshttps://jmweddings.ca/wp-content/uploads/2019/06/190405_4344-destination-wedding-photographer-sanctuary-cap-cana-dominican-republic-jm_photography.jpg200px200px