The Tan-Mah’s Wedding at The Lake House in Bonavista 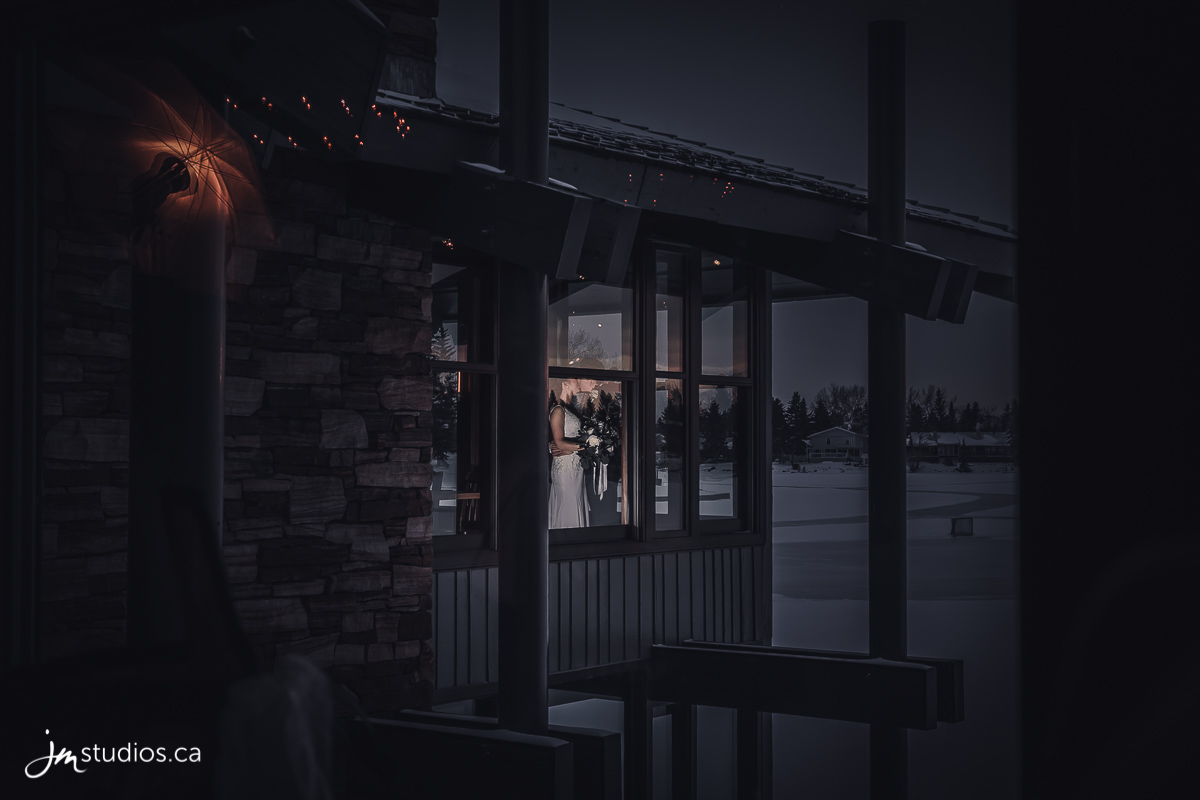 A Wonderful Wedding in Crisp Calgary

The morning of Cindia and Trevor’s wedding was a chilly one in Calgary. Thanks to an icy snap that blanketed the region over the winter, the temperature with the wind chill hovered between -39 and -42 degrees Celsius! But the easy-going couple was heartily prepared with thermals and snow boots!

We started our day with the guys at the Hyatt Regency in downtown Calgary, where they were getting ready up on the twenty-first floor. They were finishing up with the bowties when we arrived, so we photographed the rest of his preparation, including fastening his custom cufflinks, one a moustache, the other the initials “C&T.”

After a quick session with Trevor, we moved over to Cindia’s ready room. She was out having her hair done by Anita at Shear Synergy Studio and makeup by Diana of Aura Spa. We met her dad and uncle and photographed her dress, shoes and jewelry before she joined us. Her mother helped her into her beautifully detailed gown and jade jewelry. The significance of jade in Chinese culture is rooted in a long tradition and acts as a symbol of benevolence, preciousness, and beauty. It is sought after as a valuable gift or heirloom because of it.

Once she was ready to go, we took a final shot of Cindia and her mother, against the backdrop of a bright Calgary skyline.

For their first look, Cindia had chosen a balcony on the second floor of the Hyatt Regency; the perfect spot. We stowed her away and brought Trevor down. From across the open floor, we photographed Cindia who made her way around to Trevor as he stared out at the city. She touched him on the shoulder and turned to see his beautiful bride. The two shared a moment, and she read him a letter she had penned. We moved to the side, using a long lens so the two could sit for a bit and enjoy each other’s company.

The Creative Formals, Starting at the Sandstone Lounge

We then grabbed the wedding party and headed down to the main lobby and into the Sandstone Lounge. The bar has a cozy fireplace and a vintage vibe, with a photogenic bar that served as our backdrop. We photographed the wedding party, adding a backlight for a bit more drama.

Having opted not to make the entire wedding party brave the icy cold outside, the brother of the groom/best man, Ryan, really earned his title. We stepped into the arctic temperatures – (Calgary measured colder than the North Pole that morning) – and Ryan was an incredible help, making the quick session run smoothly. We headed down to the Shannon Terrace Amphitheatre in Fish Creek Park and went with the couple out into nature. Cindia and Trevor had spent some time researching locations before their wedding, which was incredibly helpful, especially with the cold.

We began their formal session down a forested path and then followed it down to a frozen-over Fish Creek. Each stop the couple braved the frigid temperatures and passed their jackets off to Ryan. Over the snow, we climbed out onto the ice, where we got some great shots of the couple against a dramatic line of conifers. The shots turned out beautiful and crisp, with clean white snow blanketing the forest.

Their Ceremony at the Lake House

After the brisk creative session, we met up with the maid of honour Kaitlyn at The Lake House, and she took it from there. We headed to the grand fireplace with Cindia and took a few single images. Before all the guests arrived, we captured the beautiful decor in the room. The warm space was lit with antler chandeliers and hanging lights, and lanterns and candles were strewn about, adding to the rustic vibe. Large windows looked out to the lake, brightening the space for the ceremony.

Pam Davidson from Happily Ever After hosted the ceremony, and lead an excellent service. Everyone entered down the aisle, joined by the adorable Sophia and Ben, the flower girl and ring bearer. Once the room was ready, Mr. and Mrs. Tan walked their daughter down the aisle to Trevor. The couple began with traditional vows, followed by their heartfelt personal ones, before exchanging rings and becoming husband and wife.

After the ceremony, we set up for a unique shot with the newlyweds. They moved to the windows of The Lake House, and we photographed from outside, through one of the hall windows. The effect is a beautiful image, intimate and cozy, capturing them through the glass as they stand in the warmth over the winter landscape behind.

The Tan-Mah Reception at The Lake House

Before the entrance to the reception, the happy couple had time to mingle with their guests. The vibe was light and chatty, a mix of English, Cantonese, and Mandarin floating around the room.

The newlyweds made their official entrance as husband and wife, and dinner was underway. The Lake House provided an incredible meal, starting with a soup, followed by the main course of fish or steak, with sides of potatoes and hot veggies. Speeches were interspersed between the courses, with a central topic being golf, one of their favourite pastimes.

After everyone had enjoyed their dinner and the beautiful speeches, it was time to cut the cake. Then, the dessert table came out, covered in delicious treats such as cheesecakes, brownies, lemon tarts, and chocolate passionfruit truffles.

We brought out our same-day slideshow to an emotional and heartfelt reception.

Then it was time for DJ Johnny Wong with PEZ Productions to turn the reception into the dance. The first couple started things off, followed by Trevor and his mom, and finally, the whole party was up. About thirty minutes into the dance, DJ Johnny began a game for the bouquet. All of the couples got up to dance, and they sat as he counted up the years. The couple left standing had been married for an incredible forty-seven!

After the game, he kept everyone on the dance floor, reading the crowd and choosing the right tunes. Later into the night, he held a competition, where he played a mix of Backstreet Boys, MC Hammer, Vanilla Ice, and more, for a cheesy dance-off. The final six, who lasted well into the recesses of eighties and nineties hits, were all prized with a box of Kraft Dinner, the Canadian classic!

We wrapped up the night with family photos, heading down into the beautiful wine cellar at The Lake House for an elegant turn-of-the-century-vibe. The newlyweds are fans of Downton Abbey, so we channelled that in the lighting of the space.

Then it was time to bid the party good night! We had a wonderful time with Cindia and Trevor on their special day. We hope they love their images as much as we loved capturing them!

Some of my Favourite Photos from Cindia and Trevor’s Wedding