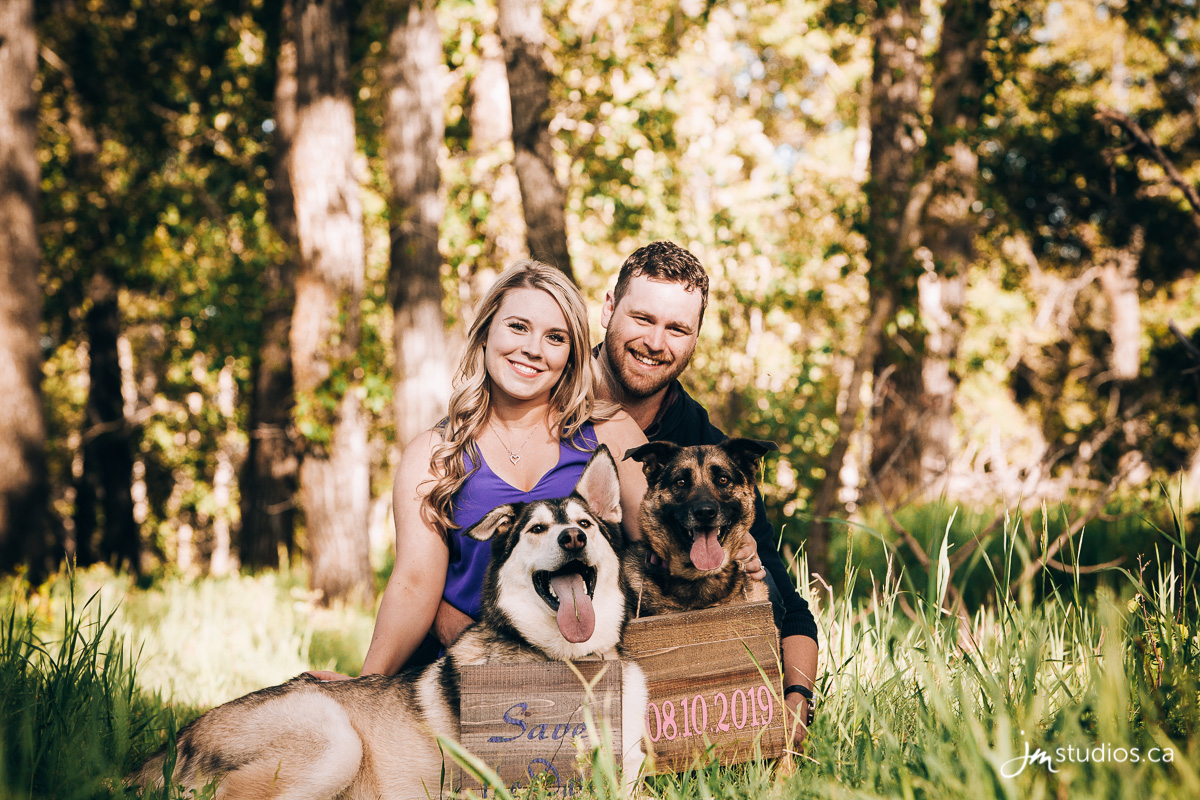 A Session Under the Chinook Sky

Meeting for the First Time… Again

Zoe and Ryan first met at Cowboys in Calgary and really hit it off. Little did they know, they had met before, a few weeks earlier at the house party of a mutual friend. They were unaware of their star-crossed path, until in a stroke of serendipity, a photo of the party resurfaced. In it, Zoe is wearing Ryan’s hat! Neither of the people in those photos knew they’d just met their future spouses. The couple went on their first few dates in May, and by Stampede in July they made it official.

Fast forward to 2017. At the beginning of the year, they tried on a few rings, and Ryan bought one shortly afterward with the intention of proposing on their upcoming trip to Australia. A few days before the flight, the ring still hadn’t arrived. The jeweller, Michael Hill, went the extra mile, promising that even if the ring came the day of the flight, they would hand deliver it to the airport. In the end, however, it wasn’t meant to be. The ring didn’t arrive until the couple were well into their multi-hour flight. In hindsight, both Zoe and Ryan agree that it was for the best; their busy trip didn’t afford them the opportunity for a proper engagement anyway.

Once home, Zoe returned to work at Sirocco Golf Club, already in the swing of the high season. Again, the opportunity to get engaged didn’t present itself.

As the year began to creep toward its end, the pair went on a dog sledding trip, with the full intention of getting engaged on the trail. Unfortunately, once again, it wasn’t in the cards. The original sledding trip had included multiple stops at various beautiful and proposal-friendly sites, but the weather hadn’t cooperated, and the trip was shifted to another trail. On the alternate route, there were fewer locations to propose, and Ryan hadn’t taken into account how physical dog-sledding actually is! At the only suitable place to pop the question, he was so out of breath that it definitely didn’t seem like the right moment!

Driving home, after having each plan thwarted, Ryan was more than ready. They stopped in Kananaskis Country on the way back to Calgary, he got out of the car, got down on one knee, and asked Zoe to be his wife. She was elated! After all of the struggles in putting the ring on her finger, there it was! They were engaged!

The Engagement Session at Sikome Lake

For Zoe and Ryan’s engagement session, we had initially planned to go to Lafarge Meadows, but the gate was closed, so we took a detour to Sikome Lake at the edge of Fish Creek Park. The day had also begun with heavy winds, but a beautiful Chinook arch blew through the city, warming it up and covering the sky with delicate wispy clouds.

The couple brought along their two dogs for the family portion of the shoot, and Zoe’s mom Sue came along to wrangle them up. The pups are high energy, and weren’t interested in standing still at first! However, Zoe created hanging signs for the session, and once they were placed around the dogs’ necks, they sat still, practically frozen. It made them easy subjects!

After the family photos, Sue took the puppies home, and we headed back into the forest with Zoe and Ryan. We used the spectacular, tree-filtered natural light for many of the photos, giving them an ethereal quality. The couple changed into their more formal attire, Zoe in a beautiful dress and Ryan in a dapper shirt. We headed down the path and found a great wooden wall to use as a backdrop. Using a backlight, we created a silhouette of the couple through the dense forest.

We wrapped up the shoot down at the Bow River, where the late sun and soft windswept sky served as a beautiful backdrop to finish the session.

We had a lovely day with Ryan and Zoe, and hope they love their images as much as we enjoyed capturing them!