The Near Wedding at the Four Points Sheraton 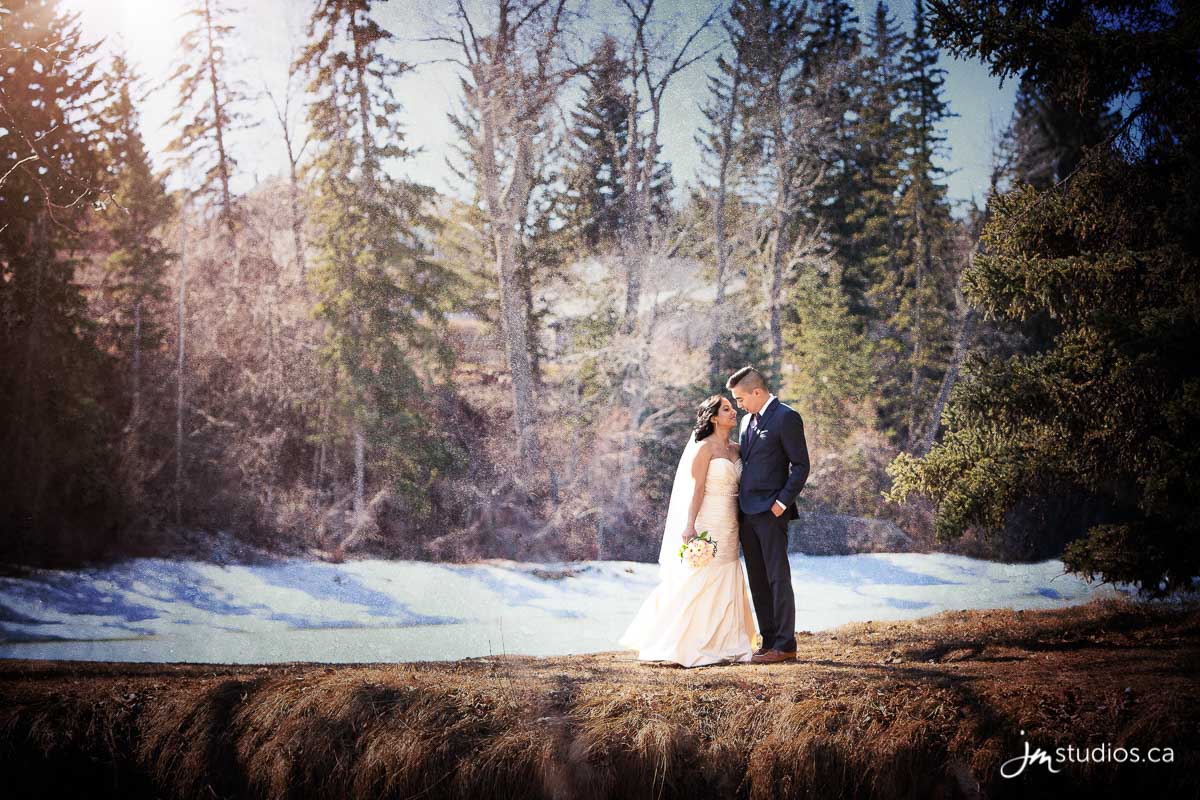 From Classic Drive-In to Bollywood Surprise

We began the day of Neena and Sean’s wedding down at the Four Points Sheraton Calgary West. The guys were getting ready in the Presidential Suite, so we headed up. As we walked in, the group was playing some Nintendo Switch, and the ring bearer was crushing the hopes and dreams of all the other players.

We started the photographs right away as Sean gifted his groomsmen with ‘tactical boxes’; a kit for the day complete with a bottle of bourbon, ties, socks, and accessories for the day. After the guys opened their gifts, we photographed as Sean got into the suit. In the suite, the windows were letting in some great light, so we set the groom up next to the large mirror and captured him fastening his shoes, shirt, and tie. We photographed the rings and their special box, before Sean’s dad came in to congratulate him.

Once we had wrapped up with the guys, it was time to move next door to the honeymoon suite, where the bride and her mother, sister, and bridesmaids were getting ready. Amy and the team from Illuminate Makeup were putting the finishing touches on the ladies and were a great help in getting our shots. Once complete, we photographed the bride with her beautiful dress and jewelry.

Next, it was time for the bridesmaids to open their gifts. Each was given a beautiful bag containing a personal letter and some other ‘tactical’ items for the day, including fuzzy shawls to keep them warm in the early spring air. Also included in the gifts were floral robes for each of the girls, so they got into their matching digs, and we photographed the smiling group.

Then it was time to get into the dress. With help from her mother and sister, Neena was zipped in, her earrings were fastened, and her rose-gold shoes were slipped on. To celebrate, the group shared a Prosecco toast before heading off to the first look!

We returned to the presidential suite, where Sean was waiting patiently for his bride. The groomsmen had already made their way downstairs to prepare for the formal pictures, and the bridesmaids headed down to join them. We set the groom to look out the window, and captured an incredible shot of Sean, staring off into the landscape as Neena approached, unseen. As soon as he turned around, the adoration he has for her was immediately apparent. His voice was full of emotion, and he was in awe of his beautiful bride. The couple had prepared personal letters for each other, so we stepped away so they could share their moment in privacy.

The Creative Formals in Bowness Park

Down in Bowness Park, Sean, Neena, and the party met us at the entrance, and we set off from there. Nearby is a pond that serves as a launch point for kayak, canoeing, and paddle boating in the summer, and it was a great place to start. The pond was still frozen, and the sunlight was perfect, affording us a plethora of locations for the shoot. And because Bowness is such a large park, we were able to get some considerable distance in the shots, which only added to the grandeur in the images.

We started photography with the entire group, setting them on the island where they store the boats in the summer. There was still a skiff of snow on the ground, so we had a variety of backdrops to choose from!

We broke into two teams, the girls by the evergreens and the guys on the bridge that spans the Bow River. After photographing each group, we swapped locations, and the girls walked along the bridge.

To finish the outdoor portion of the formals, we took Sean and Nina along the river, to a beautiful private spot with a perfectly placed bench. We photographed the couple together, before heading down to Angel’s Drive-In.

Angel’s Drive-In, at the edge of Bowness Park, has been a Calgary staple for decades. Opened as the Bowness Dairy Bar in 1954, the drive-in features checkered floors, stainless steel accents, and a vintage Cadillac on the roof harkening back to the early days. It’s a special place and made for an excellent photo location.

We began right out in front with the soon-to-be newlyweds, photographing them with the iconic drive-in as a retro backdrop. Inside, the team at Angel’s was incredibly gracious, allowing us to move around the space and capture images of the couple and their wedding party enjoying their fries and milkshakes. It was an excellent time for the group to relax and spend some time together. We then stepped outside again with the happy couple, and took a few more shots of them around the drive-in, before heading back to the Four Points Sheraton.

Upon our return, we set up for family photos in front of the large bookcase in the lobby, and after a breezy family session, it was time for Neena and Sean to get married!

Their Ceremony at the Four Points Sheraton

Led by Cynthia Beare, the ceremony was beautiful and simple, with a relaxed atmosphere due in part to the guests, who were spread around the room at their designated tables. Once Sean was settled at the front under the twinkling archway. Neena entered in, accompanied by her uncle Darshan, who was standing in for her late father. Afterward, she told us that even though her emotions were running high, her uncle was an incredibly calming presence, and she couldn’t imagine anyone else standing up for her in her father’s place. And to cap it off, throughout the entire day, Sean carried her dad’s wallet with her, even as he said ‘I do.’

After settling in, the couple read their vows and exchanged their rings, before sharing their first kiss as a married couple. To finish the ceremony, they signed their documents at the head table and then took a short break to give guests the time to mingle and enjoy the cocktail hour.

The Near Reception at Four Points Sheraton

After enjoying a break, the newlyweds entered the reception around six, and speeches commenced shortly after. His dad speech was quite emotional, mentioning the great pride he has for his son, his journey from Edmonton down to Calgary, and the moment they realized he wouldn’t come back. He spoke of Neena being the piece to complete the puzzle that is Sean, shared his gratitude for how happy she makes his son, and welcomed her into the family.

The newlyweds followed, thanking everyone and taking the time to recognize the special people in their lives. They told anecdotes, some funny, and some heartfelt, but all incredibly touching.

When the speeches wrapped up, a unique and undeniably imaginative performance took place. Through dance and song, the epic love story of Sean and Nina was presented. In the style of a Bollywood film, the show was heartfelt, funny, and musical! One of the dancers was even wearing an Oilers jersey to represent Sean. It was a spectacular presentation, and the bride and groom were absolutely enthralled!

We followed up the dance with our same day slideshow, and then it was time to start the dance! And boy, did it pick up quickly! It began with the first dance, and then the party overtook the entire floor, staying that way for nearly an hour until the final dinner course was served. Attention then shifted to the delicious array of salads, naan, rice, chicken, sauces, and a roast.

After dinner, Nina was sad to see that the dance floor had quieted. Sean, determined, swore he would get it going again. And sure enough, shortly after his impassioned decision, the dance floor exploded! Nearly all of the guests packing the dance floor, and DJ Randeep Sarpal from House of Bounce pumped out the tunes for one of the liveliest dance floors we’ve ever seen!

We had a beautiful day with Sean and Nina, from strolling around Bowness Park and Angel’s Drive-In, to dancing the night away. We hope they love their images as much as we do!

The Near Wedding Day Slideshow

Some of my Favourite Photos from Neena and Sean’s Wedding